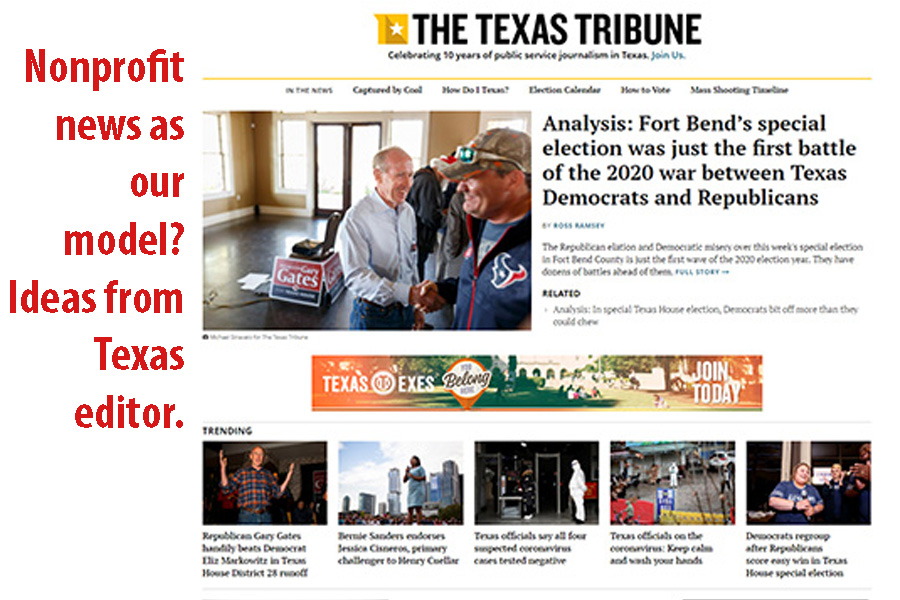 Smith presented the Margolin Distinguished Lecture on Jan. 23 in the Cable Center on the campus of the University of Denver, and his thoughts and experiences in professional journalism have lots of implications for student media.

Smith, who is the former editor of the Texas Monthly magazine, and the editor of www.texastribune.org for the past ten years, predicted that newspapers will exist in the future but will rarely be in print, due to the many legacy costs – printing, presses, distribution, etc.

He and his colleagues have built an online community focused on public policy, politics, and statewide issues in Texas. Their mission is tightly focused on that combination of events and challenges. The Texas Tribune includes no sports or reviews or fashion news, and Smith said a singular focus made the site more effective and more authoritative.

“Communities are better,” he said, “when better informed.”

Smith’s audience included professional journalists as well as DU faculty and students, and he laid out his definition of journalism early in his presentation: “We search for the truth and tell people what we find.”

Smith said that he had refined that basic definition over time, with three purposes guiding his work. The first: “Didn’t find the truth? Why was that?”

The second goal: “We hold people in power and institutions accountable.”

And the third goal is “We ‘tee up’ the things important enough for busy people to stop and pay attention to.”

The Texas Tribune is a nonprofit 501 (c) (3) corporation and the business model makes EVERYTHING they publish free for others to republish, including photos, commentary and more. Over 250 Texas publications republish the site’s work, choosing from their range of content and prompted by a daily email with links to that content.

How do Evan Smith’s remarks connect to student media?
Smith described The Texas Tribune as completely online and nonprofit/non-partisan. Student news platforms are increasingly online and public school news media should be nonprofit and non-partisan, by definition. The Tribune is a parallel model that we should pay attention to.

Should student media at your school tighten its mission and not spend its human capital (student time) on diffuse reporting that uses the general newspaper model? We are increasingly modeling on magazines, and the most successful magazines build credibility and influence due to becoming the “expert” resource for readers.

Smith shared several examples of long-form journalism working online, perhaps with fewer general readers but engaging those readers more deeply. We are seeing less and less investigative reporting in student media, but online platforms are nearly limitless in scope, at little extra cost. We might not be able to devote eight pages in the school magazine to one topic or issue, but the “real estate” available on our websites is vast.

Smith said that the Texas Tribune could not meet its public service goals if it placed content behind a paywall. Paywalls may be important for professional newspapers, like The Denver Post, but student media is free and open to all. Can we leverage that?

The site has a continuing feature called, “Teach me how to Texas,” which is a newsletter primarily aimed at the many people moving to Texas from elsewhere. In student media, we might call those new residents “freshmen,” and a “Teach me how to Englewood” or “Teach me how to Sierra” seems like a no-brainer category for our websites and even social media.

The Texas Tribune sponsors many events, where the community gets to meet newsmakers, elected officials, etc. and talk directly to them. They livestream all those events and archive them so a wider audience can participate. Should student media at your school be leaders in creating opportunities to meet decision-makers and community members?

They created a private Facebook group that focuses on a different topic teach month or so, encouraging community and calm debate. This private group is monitored and the “jerks” are kicked out. Is this the new way to create focus groups and seek responsible feedback from our own school communities?

The Texas Tribune is supported by underwriting as opposed to advertising, along with corporate and family sponsorships and gifts. A lot of student media is still using the advertising model and many publication report difficulty in getting those ad dollars. Is it time to seek support the same way other nonprofits do?

Once we decide to go “all in” with online media, we have, by definition, chosen to appeal to something less than the entire student body (contrasted to when we printed a copy of the paper for each student). That means we are not likely to reach the uninterested and unengaged. So how do we define our intended audience and what is the percentage of your community engaged with your medium that equals “success”?