CSMA partners with CMCI in Boulder for adviser professional development - what we learned, and some useful resources here 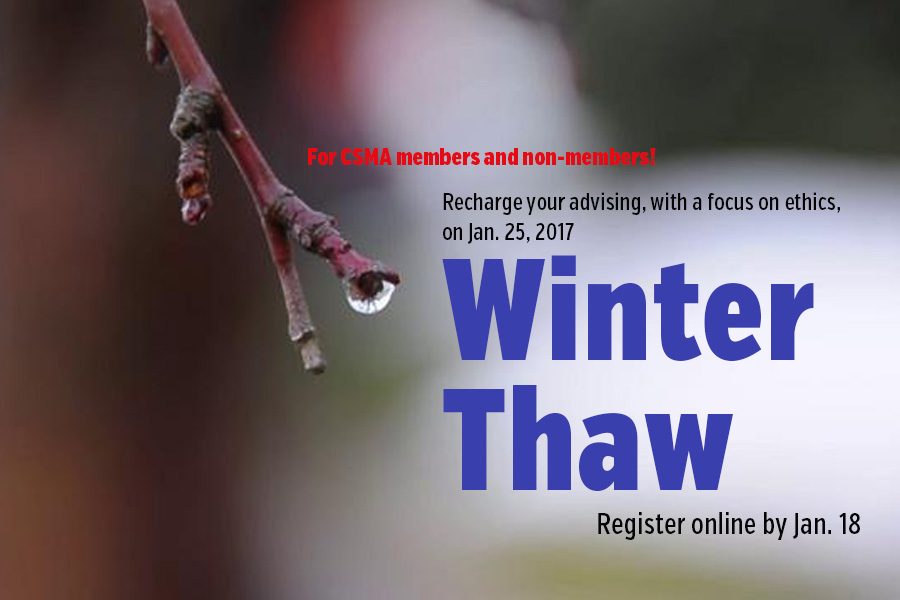 DOING ETHICS
Paul Voakes, who teaches Media Law & Ethics at CU Boulder: Ethics can be taught. We DO ethics, as opposed to HAVE ethics.

He began with a discussion of Deontology (see PowerPoint shared by Paul), with has the advantage of being less gray than situational ethics, for instance, with clearer lines. It appears “easier.”

Examples of categorical imperatives we shared: murder, lying, stealing, not intending to repay debts. Kant said these were among behaviors humans should NEVER do. Paul mentioned that most Seinfeld episodes revolved around lying, for instance.

His presentation also took the group through Utilitarianism (greatest good for the greatest number).

Teaching tip: students can identify extremes (thought the examples of various behaviors/beliefs can be offensive), and then find something in the middle that resembles the mean.

ADVERTISING ETHICS
Erin Schauster ([email protected]), is a professor at CU Boulder, who presented on what is right or “good” in advertising. She worked in display advertising on her college newspaper, and as an account manager in Nashville professionally. She studies strategic communications.

She discussed “paid placement” advertising, which is perhaps of more interest to major news websites (though isn’t it just a matter of time before student news sites begin to contract with ad providers to find new revenue?). Paid placement ads include native advertising and “clickbait,” which may be disguised as news. She discussed the ethics involved in accepting “programmatic ads,” where computer algorithms do the buying and placing.

Questions for such programmed advertising:

She shared an example of a firm working to increase transparency (one of the goals of good advertising) from Dove’s “real beauty” campaign. You might start students off with this short video, if they are not aware of the campaign.

She also shared an example of a poor ethical choice, from an Audi ad that was banned. And here is another, which is also quite questionable. She also shared one from this series of VW ads, as part of her discussion of advertising having three goals: informational, truthful, and persuasive.

Erin discussed the importance of defining our audiences (perhaps through media kits), and also mentioned vulnerability as a factor – that is, are some audiences more apt to be harmed by specific advertising content?

Erin also discussed what is known as the TARES test as a way to determine if a particular ad is ethical.

T – Truth (not only is the content true, but are there omissions?)
A – Authentic (sincerity? Does content align to your brand?)
R – Respectful (are there unintended audiences or meanings?)
E – Equitable (is there a level playing field?)
S – Socially Responsible (are “duties to others” considered?)

She discussed native advertising (advertorial), where reporters are paid by a company or entity to create content that looks like journalism (and may, in fact, BE journalism). But the practice blurs boundaries. She shared this example of a native ad commissioned by Netflix for “Orange is the New Black.”

Teaching tip: Looking for a great site for advertising samples to share with students, or to point them to for their own research? Try http://adland.tv/

JOURNALISM DEFINITELY HAS A FUTURE
Greg Moore, former editor of the Denver Post and now the Hearst Visiting Professor of Professional Practice at CU Boulder, drew from his 40 years of professional journalism experience in discussing a wide range of issues facing the profession today.

He began by saying that he retired from the Post because he was “tired of downsizing a paper that I love.” He challenged everyone to keep emphasizing objectivity, which he defined as “another person with the same set of facts would likely come to the same conclusion.”

Dealing with “fake news,” a term he hates? “The more sensational the claim in something you read,” he said, “the more skeptical you should be.” He prefers using terms like “it’s a lie,” or it’s propaganda, or advocacy.

He still favors journalism majors, though he recommends dual majors to add content knowledge to reporting..

When asked about the Buzzfeed “Trump dossier” issue that had just been in the news, he said that publication of that document failed the first test – verification – and we should not publish everything we know. He said, “The rules of journalism have not changed in 2017.”

Greg said, “A free press is not free.” It’s expensive. He said that going all-digital would make newspaper immediately profitable again, all other factors being equal (no more ink, paper and distribution expenses).

He recommended the metaphor of using “a garden hose as opposed to a fire hose to consume information.” He said that metaphors are very important, and referred to a classic from “Romeo and Juliet”: “The sweetest honey is loathsome in its own deliciousness / And in the taste confounds the appetite.” There is more information out there than it’s possible to comprehend.

He went on to say that he believes in a “balanced diet” of news. He includes some conservative sites/course, and reads the Wall Street Journal opinion pages every day.

When asked if it was worth printing paper publications, such as magazines, he said yes, and emphasized that most of the needed skills could be developed in all the journalism platforms.

He finished by confessing that he used to tell audiences that “most news is bad news,” but now finds that answer a bit glib. “It’s a distortion,” he said, of reality, and we need to find a better balance to better reflect what people see and experience.

HE LITERALLY WROTE THE BOOK ON ETHICS
Bob Steele, now retired from the Poynter Institute for Media Studies, where he worked for over 20 years, shared six handouts and delved into the concept of DOING ethics.

Along with Al Thompkins, also from Poynter, Bob developed a series of handouts in 1991, and the basics have not changed much over time.

Handout 5: Confidential Sources: Who? When? Why? and “Who Said That?” Guidelines for Evaluating Sources

Bob believes in using a clear process (in writing and in ethics), and asking a series of questions when confronted with any sort of ethical dilemma. He talks about the difference between “red light ethics,” (thou shalt NOT!) vs. “green light ethics” (how to minimize harm, as with using anonymous sources).

In thinking of today’s “instant news” environment, he said that we often put rookie reporters online right away, “but without much experience in making best decisions.” Perhaps we should assign our most experienced reporters to social media reporting, where they can bring their wise thinking to bear.

Print media, he said, has lots of layers of editing and discussion in the process, and is perhaps a better place to learn.

His key questions in all cases: What do readers NEED to know, and WHEN do they need to know? His guiding principles are closer to “Mixed Rule Deontology” (see Paul’s PPT), which considers duties plus circumstances.

He also advised those in attendance to “coach up,” working with administrators before the first is white hot.

Bob said he does not use the term “objectivity” that much, preferring to discuss “objective techniques.”

His email is [email protected], and he welcomes questions about ethics from advisers.